Stability is mainly essential when we have key-value pairs with duplicate keys possible (like people’s names as keys and their details as values). And we wish to sort these objects by keys.

What is a stable sorting algorithm?

Formally stability may be defined as, how the algorithm treats equal elements. Let A[] be an array, and let ‘<‘ be a strict weak ordering on the elements of A[].  A sorting algorithm is stable if:

is the sorting permutation ( sorting moves 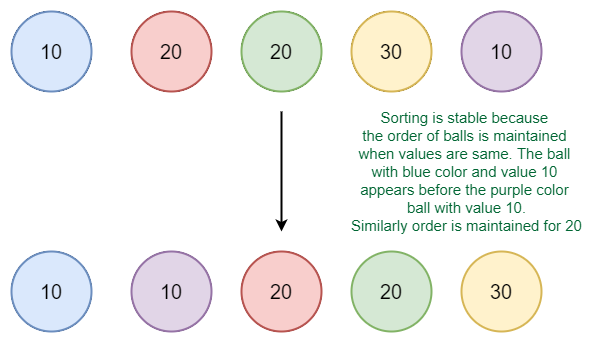 Do we care for simple arrays like the array of integers?

When equal elements are indistinguishable, such as with integers, or more generally, any data where the entire element is the key, stability is not an issue. Stability is also not an issue if all keys are different.

Where stable sorting algorithms are useful?

Consider the following dataset of Student Names and their respective class sections.

If we sort this data according to name only, then it is highly unlikely that the resulting dataset will be grouped according to sections as well.

Which sorting algorithms are stable?

if and only if

, the relative order is preserved

Other non-comparison-based sorts such as Counting Sort maintain stability by ensuring that the Sorted Array is filled in reverse order so that elements with equivalent keys have the same relative position. Some sorts such as Radix Sort depend on another sort, with the only requirement that the other sort should be stable.

Which sorting algorithms are unstable?

Quick Sort, Heap Sort etc., can be made stable by also taking the position of the elements into consideration. This change may be done in a way that does not compromise a lot on the performance and takes some extra space, possibly

Can we make any sorting algorithm stable?

This article is contributed by Chirag Manwani. If you like GeeksforGeeks and would like to contribute, you can also write an article using write.geeksforgeeks.org or mail your article to review-team@geeksforgeeks.org. See your article appearing on the GeeksforGeeks main page and help other Geeks. Please write comments if you find anything incorrect or want to share more information about the topic discussed above.