Sleep Sort – The King of Laziness / Sorting while Sleeping

In this algorithm we create different threads for each of the elements in the input array and then each thread sleeps for an amount of time which is proportional to the value of corresponding array element.

All this multithreading process happens in background and at the core of the OS. We do not get to know anything about what’s happening in the background, hence this is a “mysterious” sorting algorithm.

Example : Let’s assume (for convenience) we have a computer that’s so slow it takes 3 seconds to work through each element:

Implementation
To implement sleep sort, we need multithreading functions, such as _beginthread() and WaitForMultipleObjects(). Hence we need to include windows.h to use these functions. This won’t compile on Online IDE. We must run it in your PC (Note this code is for WINDOWS and not for LINUX).

To perform a sleep sort we need to create threads for each of the value in the input array. We do this using the function _beginthread().

In each of the threads we assign two instructions:

2) Print : When the thread ‘wakes’ up after the sleep then print the array element – arr[i] which this thread is associated to.

After creating the threads, we process these threads. We do this using WaitForMultipleObjects(). 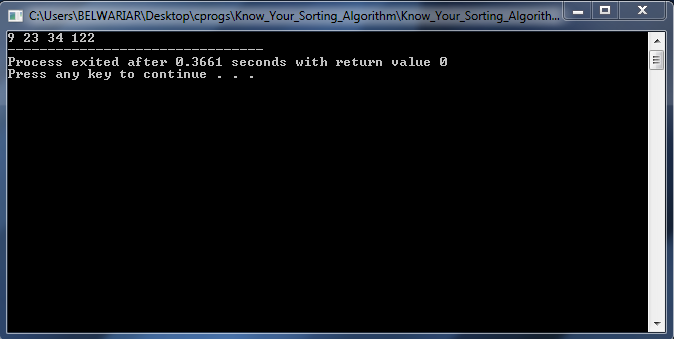 Limitations
1) This algorithm won’t work for negative numbers as a thread cannot sleep for a negative amount of time.

The reason for such an unexpected output is because some time is taken between scanning through each element as well as some other OS operations (like inserting each threads in a priority queue for scheduling). We cannot simply ignore the time taken by all these things.

We describe this using the below example-

The above output is just an example.
Obviously, modern-day computers computer are not so slow (to take 3 seconds to scan through each element).
In reality running sleep sort on a modern computer on the above array gives the output – {9, 5, 7, 10, 8, 6}

How to fix this ?
1) We can fix this by repeatedly sleep sorting on the new output until the output becomes sorted. Every time it will sort the elements more accurately.

2) The wrong output as discussed earlier happens due to the time taken by other OS works and scanning through each element.

In our program we have used the function Sleep(arr[i]), which means that each thread associated with the array elements sleep for ‘arr[i]’ milliseconds. Since milliseconds is a very small quantity and other OS tasks can take more time than ‘arr[i]’ milliseconds which ultimately can cause an error in sleep sorting. Increasing the sleeping time by even 10 times can give a sorted output as the OS tasks will finish all its task in between this much sleep, hence not producing any errors.

However it is still possible that Sleep(10*arr[i]) will give wrong results for some test cases. To make it more precise increase the sleep time more , say something like – Sleep(20*arr[i]).

Hence the bottom line is that more the sleep time, more accurate the results are. (Sounds interesting, eh?) . But again that would increase the runtime of this algorithm.

Exercise to the readers-
1) The above algorithm tries to sort it in ascending order. Can you sort an input array in descending order using sleep sort. Think upon it.

3) Can we do sleeping sort without using windows.h header and without using Sleep() function?
[One idea can be to create a priority queue where the elements are arranged according to the time left before waking up and getting printed. The element at the front of the priority queue will be the first one to get waked up. However the implementation doesn’t looks easy. Think on it.]

Since Sleep() function and creating multiple threads is done internally by the OS using a priority queue (used for scheduling purposes). Hence inserting all the array elements in the priority queue takes O(Nlog N) time. Also the output is obtained only when all the threads are processed, i.e- when all the elements ‘wakes’ up. Since it takes O(arr[i]) time to wake the ith array element’s thread. So it will take a maximum of O(max(input)) for the largest element of the array to wake up. Thus the overall time complexity can be assumed as O(NlogN + max(input)),
where, N = number of elements in the input array, and input = input array elements

Auxiliary Space
All the things are done by the internal priority queue of the OS. Hence auxiliary space can be ignored.

The phrase “Sorting while Sleeping” itself sounds very unique. Overall it is a fun, lazy, weird algorithm. But as rightly said by someone- “If it works then it is not lazy”.

Check out DSA Self Paced Course

Please write comments if you find anything incorrect, or you want to share more information about the topic discussed above